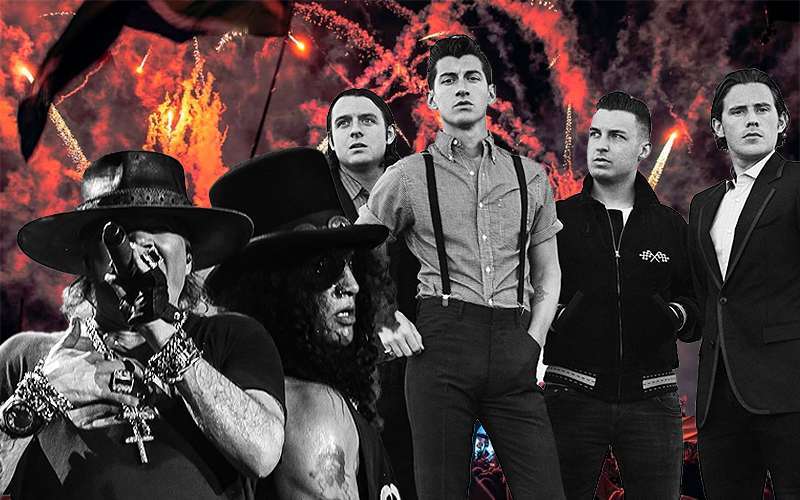 Arctic Monkeys and Guns N’ Roses are looking highly likely to join already confirmed Elton John at Worthy Farm this summer as the Friday and Saturday night Glastonbury 2023 headliners (respectively), after even more fuel has now been added to the fire of already very strong rumours circling the web.

News of Arctic Monkeys possibly headlining the 2023 Glastonbury Festival started permeating the interwebs earlier last year after the ‘Has it leaked?’ website posted a tweet saying “AM will do Glastonbury next year [2023]”.

Then, a report from The Sun claimed a source told the outlet that Alex Turner and the band “have signed on the dotted line and will return to the Pyramid Stage next June [in 2023]”.

As for Guns N’ Roses, back in 2021, in an interview with Metal Hammer, Glastonbury organiser Emily Eavis said: “Guns N’ Roses need to play here [at Glastonbury] at some point, don’t they?”.

Although those rumours never ultimately came to fruition, a year later, in 2022, speculation started to intensify once again over a possible performance by the American rockers at Worthy Farm after the band confirmed their biggest-ever UK headline show, announcing that they’d be playing London’s BST festival in Hyde Park on Friday, 30th of June 2023 – set to take place less than a week after this year’s Glastonbury runs from Wednesday 21st to Sunday 25th of June.

Now, Neil of UK festivals website, eFestivals, has posted a message on the forums section of the site (seen below), saying he’s “hearing that the […] headliners are Arctics and Guns n Roses”, as well as mentioning that also Lewis Capaldi and Lizzo are set to play Glastonbury this summer.

If and when Arctic Monkeys get officially announced for Glastonbury 2023, this will be the 3rd time they headline the Worthy Farm-held event, after taking to the iconic Pyramid Stage twice before (on the Friday night) in 2007 and most recently in 2013.

Guns N’ Roses, however – comprised of Axl Rose, Duff McKagan, Slash, Dizzy Reed, Richard Fortus, Frank Ferrer, and Melissa Reese – have never played Glastonbury before, while Slash and his solo band did perform on the Pyramid Stage at the 2010 Glastonbury Festival (as seen in the video clip below).

In other Glastonbury news, as of this moment in time, Elton John is the first and only act to be officially announced for playing Glastonbury 2023 and will be taking to the Pyramid Stage on the Sunday of the Festival – 25th of June.

Along with Kraftwerk and Jack Johnson, some other acts who are rumoured for this year’s event, include The 1975 – who are once again mentioned in the Glastonbury context after speculation started grain traction throughout the web when the Cheshire band confirmed new tour dates – leaving them wide open over the 2023 Glastonbury weekend.

Another name that has been thrown about as a possible contender for playing at the Festival this summer includes Bon Jovi, whose guitarist Richie Sambora recently teased the “possibility” of the band playing Glastonbury 2023.

Eminem – which has yet to step foot at Worthy Farm – was said to be in “advanced talks” to headline the Pyramid Stage at the Festival this year, but now looks highly unlikely.

Rihanna‘s name had also been mentioned as a possible headliner for 2023, while Taylor Swift, however, has effectively ruled herself out of the run for 2023 – after announcing her long-rumoured return to the road, scheduled to hit U.S. stadiums beginning in March 2023 and running into August.

Other acts who are unlikely to make an appearance at this year’s event include Robbie Williams, who has recently been said to have “only two UK shows this summer”, and the Spice Girls (who have been mentioned countless times over the past years in the Legends Slot context), after Victoria Beckham ruled out a Glastonbury appearance as part of a Spice Girls reunion – following long-time speculation fuelled by her former band mates.

Therefore, some of these rumours are obviously to be taken for what they are, rumours – as any insider claiming to know anything about anything, either have access to unreleased information or is outright mistaken.