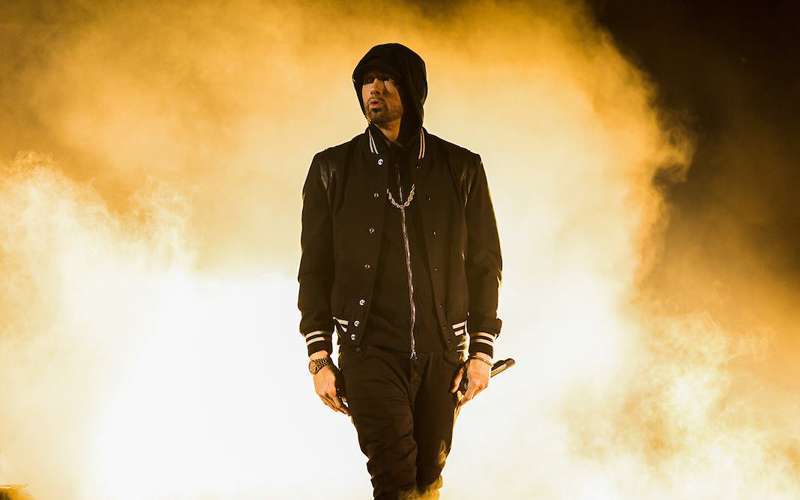 If reports are true, this would be the first time the American rapper plays the Worthy Farm-held event.

Eminem is now reportedly said to be in advanced talks to headline next year’s Glastonbury Festival.

According to The Sun, a source said: “Eminem is wanted for a huge slot at Glastonbury and has been in talks for yonks.

“His dates all line-up and if they can get him on board, it will be the first time he has ever played at the festival.

“Eminem is one of the greatest rappers on the planet and to have him down on the farm would be incredible.

“There is also a huge nostalgia factor with Eminem. He has been around for over 25 years and everyone knows his music.

“It would be a really special moment, not just for him but for everyone at the festival. The organisers think he will sign on the dotted line and they can get things moving.”

If reports from the mentioned insiders are accurate, this would be the first time the American rapper plays at the Worthy Farm-held event.

And while on the topic of Eminem and rumours, it’s probably also worth mentioning that earlier this year, there was some speculation as to whether the Detroit-born rapper would join Kendrick Lamar on the Pyramid Stage at Glastonbury 2022.

The rumours of Lamar bringing out the American superstar to join him on stage came after Eminem was said to be spotted at a luxury hotel located just a few miles away from the Festival site.

This obviously did not come to fruition but does add some context to the current rumours.

So who’s da was mistaken for Eminem at a hotel near Glastonbury for the Kendrick rumour?

As always, at this point in time, this is all just speculation and we shall have to wait on the official announcement if and when it comes.

Eminem – real name Marshall Bruce Mathers III – has ten No. 1 singles in the UK, including The Real Slim Shady, Stan and Just Lose It, while releasing 11 studio albums and selling over 220 million records online during his career to date.

The news of a possible Eminem performance comes hot on the heels of another rumour that positions Arctic Monkeys as top contenders for being one of Glastonbury’s three main Pyramid Stage headliners in 2023.

Some of the big-name acts to be rumoured for a possible performance at Glastonbury 2023 so far include Spice Girls, Arctic Monkey, Elton John, Robbie Williams and Roxy Music – who are speculated to be strong contenders to play the coveted Sunday afternoon Legends Slot at next year’s Festival.

Meanwhile, tickets to Glastonbury 2023 will go up for grabs one month later than usual this year and have been confirmed to be split into two separate days.