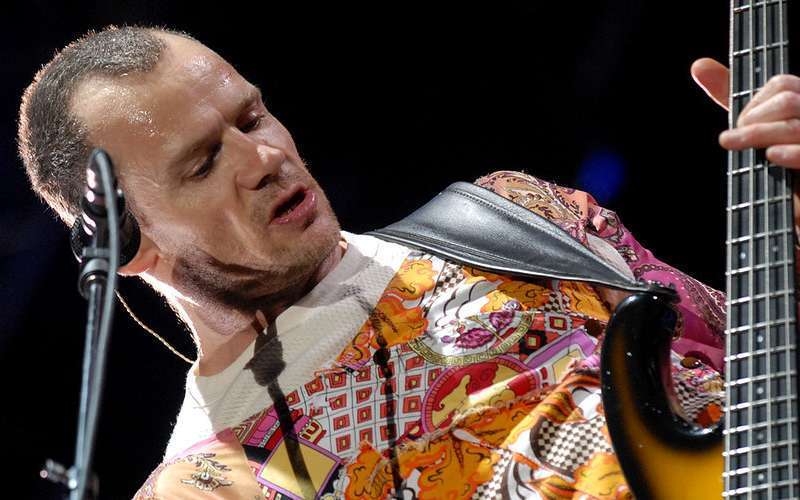 Red Hot Chili Peppers‘ bassist, Flea, has got fans speculating as to whether the California-formed band could potentially play Glastonbury Festival.

The guesswork game was triggered after Flea retweeted an image sketch of the Pyramid Stage created and originally shared by Glastonbury artist Stanley Donwood, yesterday evening (19th January) – as seen below.

Along with being responsible and creating the artwork for Glastonbury Festival, Donwood is known internationally for his creative and artistic input into the band Radiohead, whose work explores the darker and more mystical side of the natural world, folklore and society.

In his retweeted post, Flea simply added the comment “Yes”, which was enough to get the Glasto Rumour Mill speculations spinning in that direction.

Red Hot Chili Peppers were scheduled to play Glastonbury back in 1993 before it was reported that due to Flea’s chronic fatigue syndrome, they had to drop out – and eventually replaced by Lenny Kravitz that year.

While speaking to a crowd assembled at the Acoustic Stage back in 2019, the legendary Festival founder, Michael Eavis, responded to a question from the audience regarding the probably of Red Hot Chilli Peppers playing at the Worthy Farm event, to which he responded by saying: “Red Hot Chilli Peppers? That was years ago… And they didn’t turn up, do you remember? We’re not very forgiving for bands that don’t turn up.”

Looking at their 2023 summer tour dates, the band are set to play in Warsaw, Poland on Wednesday the 21st of June, followed by a performance at the Festival Odense, in Denmark on Saturday the 24th of June and then a gig in Mannheim, Germany on Monday the 26th of June.

However, in addition to already also announcing two UK shows for this year in London on the 21st of July and Glasgow on the 23rd of July, seeing that Glastonbury is set to run from Wednesday the 21st to Sunday the 25th of June, although not impossible, it would be quite the stretch for the band to try and also fit in a headliner slot at Glasto on one of their off-days – presumably the Friday of the Festival (23rd June).

Although rather tenuous, it’s worth mentioning that Flea could also appear as part of the supergroup Atoms for Peace, comprising of Radiohead’s Thom Yorke (vocals, guitar, piano), the Red Hot Chili Peppers bassist Flea, Radiohead’s producer Nigel Godrich (keyboards, synthesisers, guitars), the drummer Joey Waronker of Beck and R.E.M., and the percussionist Mauro Refosco – More on this as we hear it.

Speaking of self-confirmations – Gabrielle Aplin also confirmed she will be playing the Avalon Stage at Glastonbury this summer on BBC Radio 2 earlier this week.

Elsewhere, Robbie Williams has once again expressed his desire for playing at the Festival after being asked what his thoughts are about doing the Legends Slot at the Worthy Farm event.