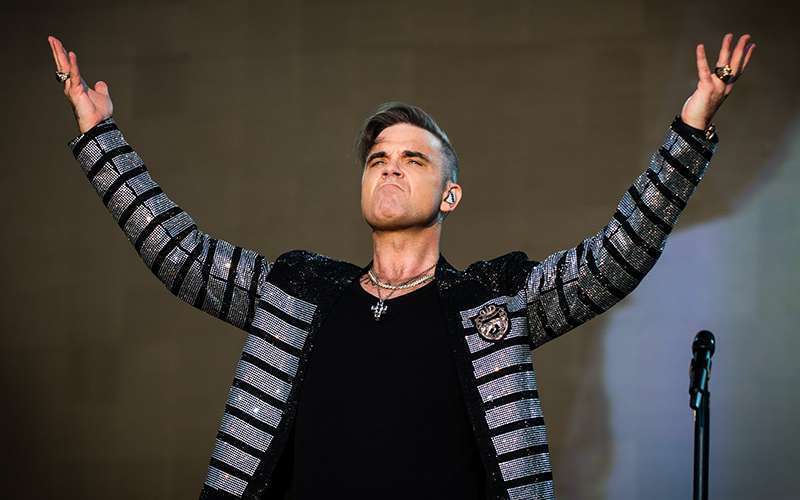 Robbie Williams, who up until recently was one of the acts rumoured for playing at Glastonbury 2023, is now looking rather unlikely for that position after announcing an ‘exclusive’ gig at the Royal Sandringham Estate – which is said to be “one of only two UK shows next summer”.

Earlier in the year, Williams said he’d like to return to the Worthy Farm event to play the coveted Sunday Teatime Legends Slot.

Now, announcing the news on its social accounts this afternoon (Monday, 5th December), concert and tour promoter Heritage Live said in a post (seen below):

“Robbie Williams will perform an exclusive UK show at the Royal Sandringham Estate, Norfolk on Sat 26 Aug 2023! One of only two UK shows next summer, it will be his only stand-alone headline concert in the UK and the first prestigious large-scale live music event to be hosted at Sandringham”.

With the one UK show being Sandringham, the second (non-stand-alone) show alluded to in the post is most likely the Isle of Wight Festival – where Williams will be taking to the stage on Sunday the 18th of June 2023.

The Angels star will also be performing next year at Bergenhus festning / Koengen, Bergen on the 22nd of June and then at Telenor Arena, in Oslo on the 24th of June – also known as the Saturday of Glastonbury 2023.

Taking all this into account, the chances of the 48-year-old singer performing at the coveted Teatime slot at Glastonbury next year now appear to be rather unlikely.

The pop star, who released his record-breaking ‘XXV’ compilation earlier this year after celebrating 25 years as a solo artist, hasn’t played at the Worthy Farm-held event since he made his debut appearance at the iconic festival back in 1998.

During a recent interview with BBC Breakfast, Williams was asked whether he’d be up for making a Glasto-comeback in the form of a Legends Slot performance, to which the singer replied: “Yeah, I’d like another go-round on that stage and feel that audience and get the chance to do it.”

BBC Breakfast entertainment correspondent, Colin Paterson, then pointed out that Spice Girls’ Mel C had already mentioned the girl group’s name earlier in the year as a possible contender for the 2023 Legends Slot – “Oh, really?” Williams responded, While adding: “The Spice Girls trumps a Robbie Williams, so maybe I’ll have to wait.”

When asked why it would mean so much to him to play Glastonbury again, Williams said: “It is the epicentre of the music world for that weekend”. You can see a clip of the interview in the video below.

As of this moment in time, Elton John is the only act to be officially announced for playing Glastonbury 2023 and will be taking to the Pyramid Stage on the Sunday of the Festival – 25th of June.

Along with Kraftwerk, The Weeknd, and Jack Johnson, some of the recent acts rumoured for next year’s event also include The 1975 – who are once again mentioned in the Glastonbury context after speculation started permeating the web when the Cheshire band confirmed new tour dates – leaving them wide open over the 2023 Glastonbury weekend.

Other names that have been thrown about as possible contenders for playing at the Festival next summer include Bon Jovi, whose guitarist Richie Sambora recently teased the “possibility” of the band playing Glastonbury 2023.

Elsewhere, Pulp revealed dates of their upcoming reunion tour scheduled for next summer – while leaving plenty of room for a Glastonbury performance,  and Arctic Monkeys are strongly rumoured after the band had reportedly signed on “the dotted line” for a deal to headline the Festival next summer.