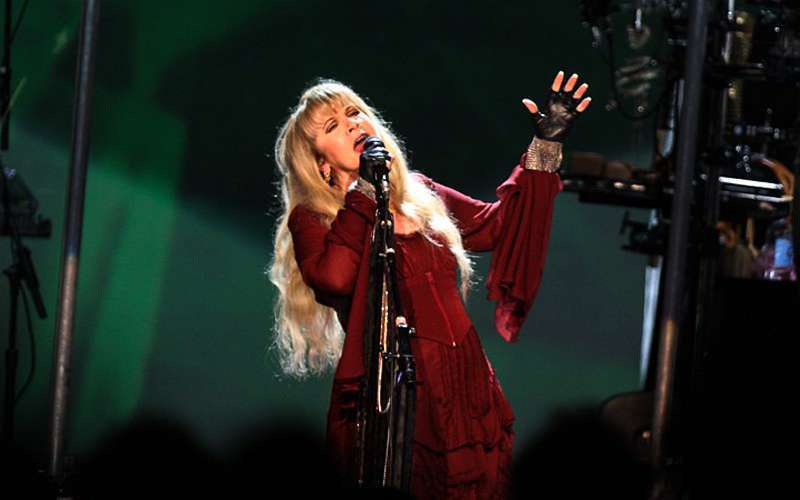 UPDATE SECTION:
Since the publishing of this article, Stevie Nicks announced a string of dates for her US tour – making it quite unlikely for her to play the Legends Slot at this year’s Festival

As a lot of you speculated, #StevieNicks‘ has just announced a string of dates for her full-on US tour… 🗓👀

Stevie Nicks‘ name has now entered the Glastonbury 2023 Rumour Mill as one of the contenders for being this year’s Legends Slot performer at the Worthy Farm event – set to run from the 21st to the 25th of June.

The post (seen below), features an 18-second long video of a silhouetted figure being unveiled on a dark black backdrop, standing under stage lights and surrounded by gold dust – accompanied by the simple message: “Details Monday”.

A multitude of names have been in and out of the #Glastonbury 2023 rumour mill in regard to this year’s Legends Slot, but none really strong enough to stick – Now enter Stevie Nicks… 👇#CouldItBe #Glastonbury2023❓🤔💭 https://t.co/XaHwKTgRPC

Some fans on Twitter have pointed out that the anticipated revelation due tomorrow (Monday, 23rd January) could be the announcement of dates for a full-on tour schedule after global entertainment company, Live Nation, also promoted the upcoming announcement via their official account.

The 74-year-old Grammy Award winner is also supporting Billy Joel in his upcoming US tour – who will be playing Hyde Park London on the 7th of July, which is said to be his “only European show of 2023“.

Another theory is that the announcement has something to do with Stevie’s latest collaboration with Dolly Parton, after recently tweeting out a photo of the two in the studio – as seen in the image below.

Happy Birthday to my new friend, @DollyParton! Had so much fun singing with you! pic.twitter.com/8Zpg2z6GVv

In 1981, while remaining a member of Fleetwood Mac, Nicks began her solo career, releasing the studio album Bella Donna, which topped the Billboard 200 and has reached multiplatinum status. She has since released eight studio solo albums and seven studio albums with Fleetwood Mac, selling a certified total of 65 million copies in the US alone.

Taking part in an in-person event earlier back in 2020 at Wells Cathedral School to speak about the acclaimed ‘Glastonbury 50‘ book, Glastonbury founder Michael Eavis expressed his hopes and wishes of Fleetwood Mac playing the Festival one day.

Addressing questions from the audience, Eavis was asked if he could invite just one act back to play Glastonbury, who would it be – to which Eavis replied: “I would like to get Fleetwood Mac to come actually […] So that’s my one wish I would say.”

Adding that they [Glastonbury] “talk to them [Fleetwood Mac] every year but it’s never quite right, or the money’s not right…” – while jokingly admitting that he is “probably a bit of a farmer when it comes to paying the fees”.

This obviously never came to fruition, and in a tragic turn of events, Christine McVie – who along with Stevie Nicks, Mick Fleetwood, John McVie, and Lindsey Buckingham made up Fleetwood Mac – sadly died late last year at age of 79.

A multitude of names have been in and out of the Glastonbury 2023 Rumour Mill in regard to this year’s Legends Slot, but none really strong enough to stick.