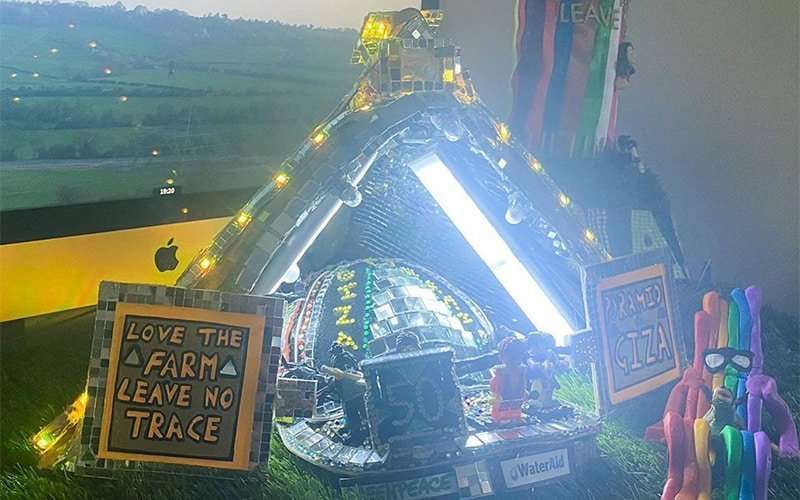 Winners receive a signed copy of the official ‘Glastonbury 50’ book

Following the cancellation of Glastonbury 2020 due to the ongoing coronavirus pandemic, the stage-building company launched a contest earlier in the month asking Glasto-fans to stay safe and build their very own Pyramid Stage at home, while sharing the final result on social media with the hashtag #isyourstageworthy – for the chance of winning a signed copy of the official ‘Glastonbury 50’ book.

Judged by none other than Glastonbury organisers Emily Eavis and her husband Nick Dewey – the winner of the Festival’s official book was announced as Twitter user ‘Crazyfool1’, who submitted a designed Pyramid Stage hat which also included a miniature model Ribbon Tower, alongside the new rainbow sculpture which was introduced at 2019 edition of the Festival (see below).

Serious Stages said: “We have been so amazed at the response to our #isyourstageworthy Glastonbury Pyramid Stage building competition and we received some incredible entries made with a variety of different materials! It has been a really difficult decision but the winner is the Pyramid Hat entry submitted via Twitter! The Serious team have also been suffering with stage building withdrawal and so we decided to hold our own ‘in-house’ competition and the Serious team winner is the incredible Pyramid Stage by Nath and John!

Emily Eavis and Nick said: “So many good ideas and thanks for all your entries. It was great fun to judge and we felt that the winners both captured the atmosphere with original ideas, style and humour!”

Serious Stages – who won the Industry Legend Award at the Event Production Awards 2019 – have been working with Glastonbury Festival for over four decades and were integral in the installation of the now-iconic Pyramid Stage.

Last year saw the ‘Glastonbury 50‘ book shoot straight into 3rd place in the Sunday Times Bestseller List for hardback books, while becoming the highest new non-fiction entry. The official book of the behind-the-scenes, inside story of the legendary Festival – composed by organisers Michael and Emily Eavis – had also been named by The Times newspaper as one of the ‘Books of the Year’ for 2019.

Following its release on October 31, 2019 (via Orion Publishing / Trapeze Books), ‘Glastonbury 50’ sold an estimated 12,325 copies in the week ahead of entering the Bestseller List.

In Amazon’s Top 20 Most Sold & Most Read Books of the Week, ‘Glastonbury 50’ is currently placed 10th among all non-fiction books after its first week of sales.

In a message from organisers, announcing Glastonbury 2020’s cancellation, Michael and Emily Eavis explained that cancelling this year’s event was their “only viable option” following “new government measures announced this week” to prevent the spread of the pandemic – saying: “We’re so sorry that this decision has been made. It was not through choice. But we look forward to welcoming you back to these fields next year and until then, we send our love and support to all of you.

Doing their best to help combat the COVID-19 pandemic – the Festival, headed by Michael and Emily Eavis, donated cotton tote bags to hospitals in need, while also giving away thousands of litres of hand sanitiser, gloves and face masksmeant for Glastonbury 2020 to frontline emergency services – including Avon and Somerset Police and NHS staff. They also gave away several thousand ponchoswhich were meant for Glastonbury 2020 and have been repurposed as anti-coronavirus PPE.