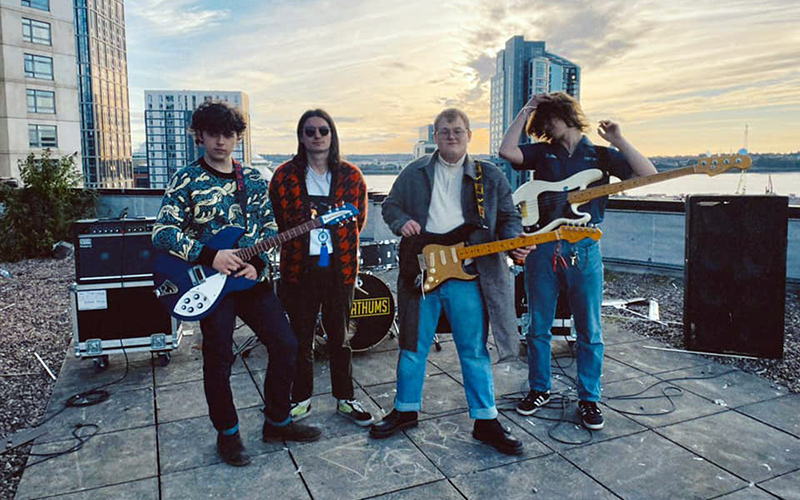 “See you at Glasto”…

The Lathums have entered the Rumour Mill after drummer Ryan Durrans (also known as Duz) has hinted that he’ll be at Glasto.

A fan asked: “Has Duz still got Ross Perkins pretty green jacket from your gig at Gorilla?” – to which Durrans replied: “Damn right I do, see you at Glasto mate – Duz”

While another fan asked straight up: “Are you playing Glastonbury?”

We thought we’d do a little Q&A since we’ve not done one in a while. Drop any questions below and we’ll reply to as many as we can x

Damn right I do, see you at Glasto mate – Duz https://t.co/Rvkc8VfQeK

Are you playing Glastonbury?

Any chance of seeing you at Glastonbury? Or at least back in London at any time this year?

And any new material?

In an interview with House of Coco lead guitarist, Scott Concepcion, said he’s got a bet with a maths teacher from his high school – where the winning prize is a chocolate bar – that he’ll be playing Glastonbury one day.

The band was formed in 2018, having met at The Music College in the local district of Pemberton, after their tutor placed them in the same project group, and were signed within a year to Island Records – They released their debut album, How Beautiful Life Can Be, on 24 September 2021, which saw its debut at number one on the UK Albums Chart on 1 October 2021.

Meanwhile, as it stands, Diana Ross, Billie Eilish, R.A.E and most recently Little Simz are the only artists to have been officially confirmed for playing Glastonbury Festival when it returns in 2022.

Some of the recent artists to self-confirm for Glastonubry 2022 include Courtney Barnett, Confidence Man, Craig Charles, Black Dyke Band and Monsieur Doumani – while Noel Gallagher said he will be up for playing if asked.