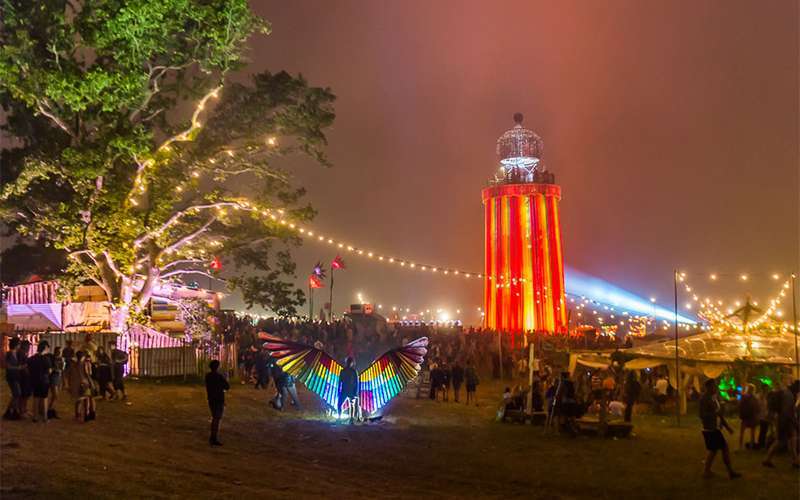 Glastonbury‘s individual line-up posters continue to come in thick and fast and this time it’s the turn of The Park – which is the thirteenth area to have its line-up poster revealed ahead of Glastonbury 2022.

Announcing the news across their social channels this afternoon (Thursday, 19th May) at 5pm, Glastonbury officials said: “We’re excited to announce The Park’s spectacular line-up for this year’s Festival!”

Perched high above the site, above Arcadia’s fiercesom, fire-breathing spider and looking out towards the Tor, The Park is a kaleidoscopic wonderland of genre-defying, synapse-sparking dionysian pleasurement.

A vibrant home of eclectic fabulousness. Nice ’n’ neat and seemingly founded in something of a natural amphitheatre, it is the perfect place to lose yourself in aural majesty. Impeccably curated, anything goes here: it’s where funk and soul, psych and punk, electro and pop merge to glorious effect.

Some of the acts featured on the poster (seen below), which will be playing on the main open-air Park Stage include Four Tet, Jessie Ware, Courtney Barnett, Khruangbin, Mitski, Big Thief, The Avalanches, Arlo Parks and many more. 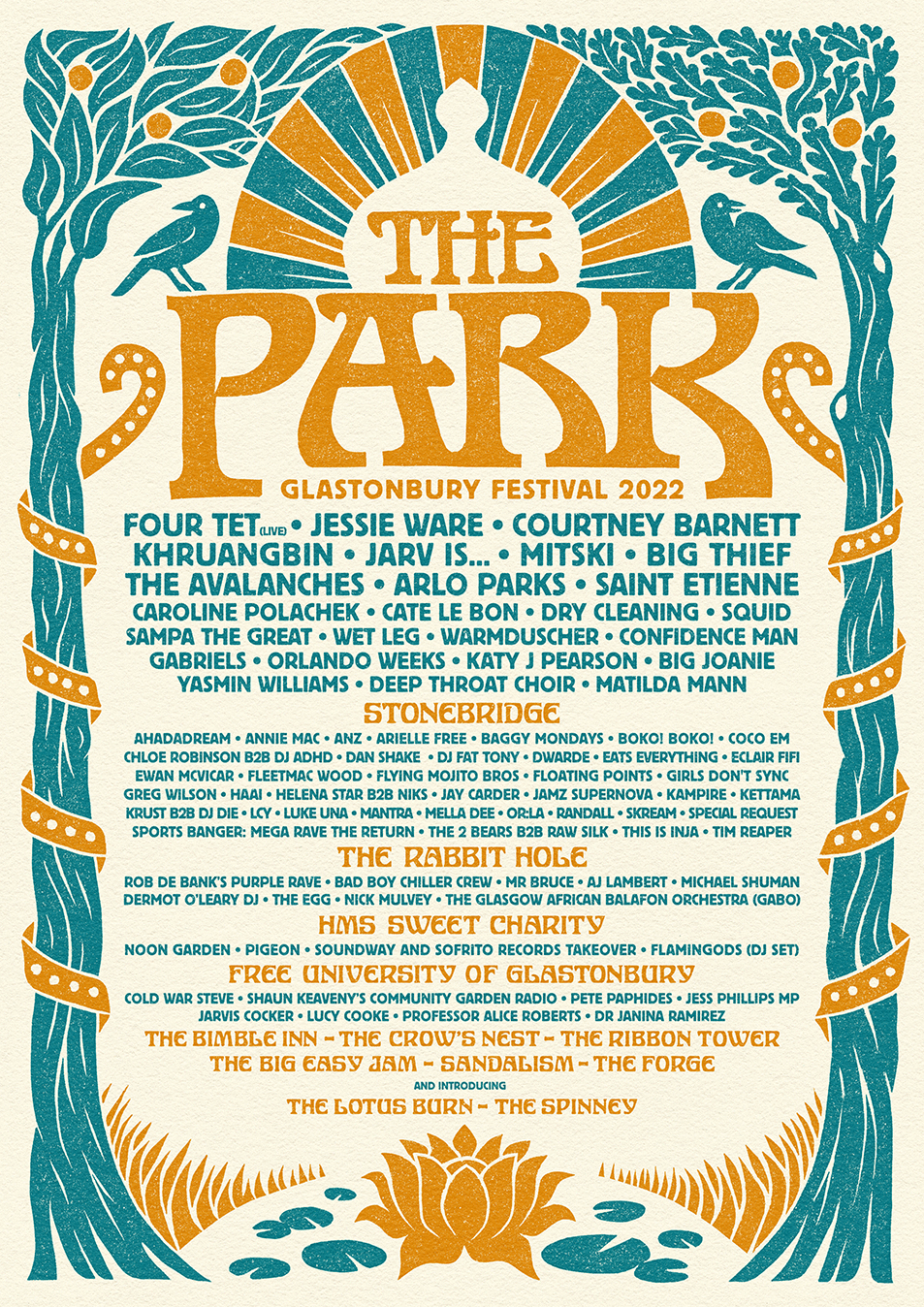 The Park Stage debuted at the 2007 edition of the Festival and was initially programmed by Emily Eavis so that she could hone her skills before assuming more of the overall responsibility of running the Festival from her father, founder of Glastonbury Festival, Michael Eavis.

Today, run by Emily Eavis and her husband, Nick Dewey – The Park includes several venues, from open-air stages and late-night bars and cafes, to teepee villages, art installations, and an illuminated 18-meter Ribbon Tower which overlooks the entire Festival site.

Across the way of the main Park Stage, at the anthem-spinning juggernaut that is the The Stonebridge Bar, there are promises of back-to-back debauched beats dealt by the likes of Annie Mac, Eats Everything and INJA.

To rest your ears but feast your eyes, take in breathtaking views of the Glastonbury Festival site from the heady heights of the iconic Ribbon Tower. From way up there you’ll spot HMS Sweet Charity – yes, an actual ship – moored aground but floating metaphorically on rum cocktails, soul-soothing melodies and good-times galore.

Further up on the hill – right up at the top of The Park – The Bimble Inn welcomes all weary travellers who have rambled this far, rewarding them with an array of the finest beverages – including Guinness on tap – and choice chunes to match.

Thirst well-sated, head to The Crow’s Nest and quench your desire for knowledge at the Free University of Glastonbury with intellect-tickling talks from Jarvis Cocker, Jess Phillips MP,  Professor Alice Roberts and Coldwar Steve.

With your marbles well-and-truly polished, try not to lose them again down The Rabbit Hole. This is where the Mad Hatter is unleashed, absurdity reigns and nothing is what it seems. But amidst the mayhem, you’ll be treated to a top-notch spread of wonderous tunes courtesy of Nick Mulvey, Jesse Malin, Beans On Toast, Rob da Bank and The Rabbit Hole’s very own Funkingham Palace, among many more.

At The Big Easy Jam, the spotlight is on you as you pick up an instrument and join in this weekend-long free-for-all jam session. From improv-jazz to alt-rock, procussive wig-outs to show-tune sing-alongs, there’s no knowing where this raucous rainbow road will take you.

For further sensory stimulation The Spinney – new this year, at the base of The Park – will inspire and revitalise, with its laidback soundtrack and evocative sculptures by Bristol-based ceramics master Dorcas Casey. While the always-spectacular Sandalism returns to impress with their sand-based creations. Evoke your inner smithy at The Forge, where metal is melted and new joyful trinkets formed.

Glastonbury’s individual area announcements have been coming in thick and fast overt the last couple of months now.

The Park is the thirteenth area to unveil its line poster over the past couple of months – with at least another four more areas still to come.

The Kidzfield revelation came on the 16th of May – just three days after Croissant Neuf‘s on the 13th, and followed announcements from Acoustic Stage and The Glade earlier in the month – on the 12th and the 11th of the month, respectively.

Portaclue: The world’s crappiest escape room is coming to Glastonbury 2022