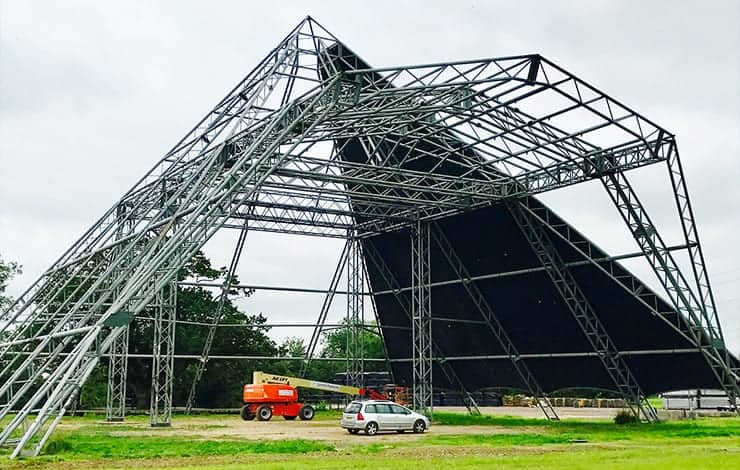 Glastonbury Festival’s iconic Pyramid Stage is beginning to get ready for 2019.

The Pyramid Stage, is by far the most instantly recognised festival stage in the world, it is now in its third incarnation.

Pictures captured via the BBC Glastonbury webcam show what is effectively the 100ft high stage starting to put her finery on.

For most of the year, the Pyramid Stage is a metal frame structure, resting amicably in the Somerset countryside fields of Worthy Farm.

Come Aprill / May the iconic stage is dressed up and has a skin draped over the bare-bones skeleton.

SHE’S GETTING HER FINERY ON!!! 👗 pic.twitter.com/epoLoM6cbR

Looking back at when the dressing began in previous years, with 2017 starting on 21st April, 2016 on 10th May, 2013 on 5th May, and even going all the way back to 2000 when the first groundwork was laid on 24th May – This year might be one of the earliest years to see the Pyramid Stage start getting dressed at.

The BBC broadcaster has a webcam mounted to a barn down at Worthy Farm, capturing great live snaps of the festival site as all the pieces nicely start to come together.

You can view the webcams live stream HERE.

In addition to Stormzy who has already been confirmed as this year’s Friday night headliner – both The Killers (Saturday) and The Cure (Sunday) have been revealed as the two headliners who will also be taking to the iconic Pyramid Stage in June.

The Pyramid is no longer over the blind spring. The stage was moved to the right by some 50meters to make a bigger exit after a crush where at a danish festival when people died.

Your links to the web cam lead to recordings from 2017.

Hi Mark, thanks for the heads-up! Rectifications now in place.