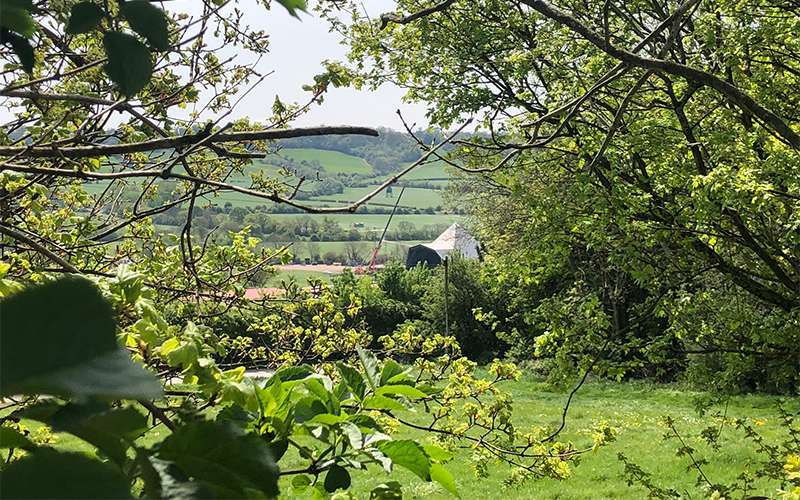 With each passing day, and in preparation for this year’s highly anticipated event – Worthy Farm is getting to look more and more like the world-famous Glastonbury Festival we all know and love.

For most of the year, the Festival site is a working dairy farm and looks totally different to when the event takes place.

However, some structures do remain static on the ground, with one of them being the Pyramid Stage in its skeleton, frame structure form – resting amicably in the Somerset countryside fields of Worthy Farm.

Many fans of the Festival like to follow the site build progress in real-time as it all starts to take shape in the run-up to opening day.

The webcam, which is hosted by the BBC and located on the Festival grounds, had stopped streaming in March of 2021 and been stuck on a static image of the sun setting over the Tor until the 9th of March this year [2022]. It then came back to life for a brief period of time, just to go off again 9 days later.

Then, on the 5th of April, it was once again reactivated after Glastonbury organiser Emily Eavis confirmed a day prior on Instagram that the beloved webcam will “be back within the next couple of days”.

Now, watching the build progress taking place live right in front of our very eyes via the BBC Glastonbury webcam, one can clearly see some of the Festival’s iconic stages and constructions arise from their deep long sleep – as this majestic Brigadoon slowly reappears after 3 long years of forced absence, due to the worldwide pandemic.

The build, which starting point traditionally tends to be marked by the commencement dressing of the iconic Pyramid Stage, began this year on the 24th of March – as seen in the tweet screenshot below.

Elsewhere on site, sleeping units – which supposedly house some of the Festival’s building team – were then delivered to the Farm on the 6th of April, followed by the infamous Long Drops which were taken out of storage and positioned into place in the days to follow.

New hybrid generators have also been put into place by the construction crew and are helping save over 700kg of CO2 a week throughout the process – which in other terms, contributes to a massive 83% reduction in consumption.

The second main stage, after the Pyramid, to rise from the rust was West Holts – which foundations were sighted on-ground on the 24th of April.

Another exciting highlight of recent days, which has gotten some fellow Glasto obsessives speculating, includes the screen supports going up on either side of the Pyramid Stage (as seen in the image below).

They seem to be different to the ones seen in previous years, as they boast extra support that runs through the middle of the frame, which could potentially mean a new kind of (larger?) side screen for the Pyramid this year – but only time will tell.

Although we can confirm the Bin Painters have already started their paintings, as seen in the video below, none of the bins has yet to be positioned into place as of this moment in time – and which will most likely happen closer to gate opening day.

As containers carrying equipment and other Glasto-goodness continue to arrive on-site intermittently, and with lots more stages and iconic venues still to be erected, the build is expected to start properly picking up pace and shifting into gear in the coming weeks of May and into early June.

Meanwhile, Field of Avalon, Silver Hayes, Glasto Latino, Theatre & Circus Fields and most recently Arcadia are five of the areas to have revealed their line-up posters ahead of this year’s event – following Glastonbury’s first main line-up announcement poster revelation, shown below, which dropped in March of this year.