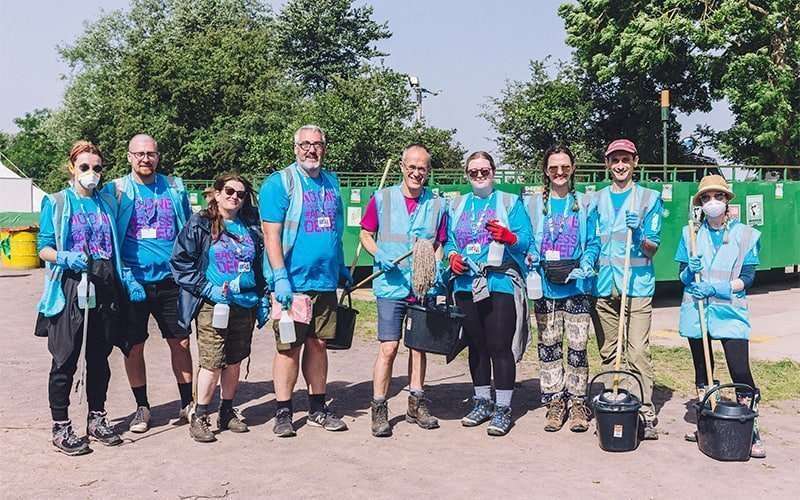 Join over 600 volunteers representing WaterAid at the world’s most famous music festival, helping deliver vital festival services and inspiring others to support the cause

WaterAid have opened applications to volunteer with them at Glastonbury 2020 this summer.

The charity has been hand in glove with the Glastonbury Festival since 1994.

Back in 2006 the festival’s founder Michael Eavis and his daughter Emily visited WaterAid’s work in Mozambique. After which time the number of Wateraid volunteers at Glastonbury Festival kept on growing to a point that by 2016, Wateraid’s volunteers for the festival reached over 500 strong.

From running water kiosks to cleaning toilets or litter picking, whatever you do, you’ll need to be prepared to talk to people about our work and encourage them to support WaterAid. By talking to festivalgoers, you will be engaging them to support WaterAid’s mission – to make clean water, decent toilets and good hygiene normal for everyone, everywhere!

Volunteers are rewarded with free access to Glastonbury 50th anniversary sold-out festival in exchange for volunteering at the five-day-long event.

It might be rainy and grey, but brighter times are ahead – volunteer festival applications are open! ☀️ 🎪

We’re heading to six amazing festivals – including @GlastoFest for their 50th anniversary!

So come on, who’s ready for the best summer ever?

WaterAid’s roles at Glastonbury are split into two teams:

The Water Team – which include: Kiosk Crew, Water Welcomers, The Refill Station Team and The WaterAid Stand Team.

Volunteers will be needed on site from either Tuesday 23 or Wednesday 24 June until lunchtime on Monday 29 June inclusive – with rotas being confirmed before the festival.

If you are volunteering at Glastonbury and you are a “new volunteer” (someone who did not volunteer with WaterAid at a festival in 2019) you will need to pay a deposit of £150.

If you are volunteering at Glastonbury and you are a “returning volunteer” (someone who did volunteer at a festival with WaterAid in 2019) you will need to pay a deposit of £50.

Some of the perks of Volunteering with WaterAid include a secure, crew-only campsite, with shower and toilet access. In addition to food vouchers or a food expense allowance, while being able to claim back part of the travel costs – In 2019, volunteers were able to claim up to £35 per person in travel expenses.

When and how to apply:

Applications are taken via an online application form which will be open from 10am on 13 January until 5pm on Friday 7 February.

Please note, it’s not first-come-first-served basis – WaterAid ask during the application process which roles one would prefer, so take the time to carefully consider all the roles available and make sure you fill out your application properly.