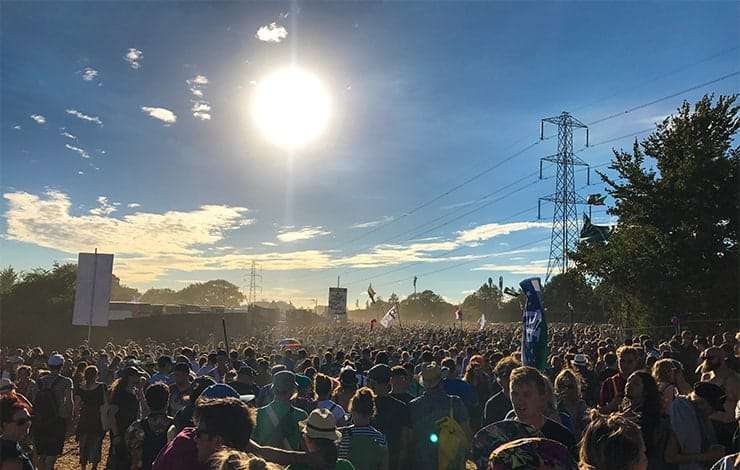 A word of warning though: Those looking for some kind of consolation, will not find it here – as the weather for what would’ve been Glastonbury‘s big 5-0 does look to be more on the sunglasses & flip-flops side of things.

Glastonbury‘s 2020 edition of the festival was due to take place next weekend  (June 24 – June 28), and looking at the latest weather forecast for the local area suggests that it would’ve been – wait for it – warm, sunny and largely dry Glasto-weekend.

According to the BBC Weather website, the local area around Worthy Farm is set to be treated to a consecutive run of dry days from June 24 to 28, with “sunny intervals and a gentle breeze” bringing temperatures between 21-26°C.

Friday (June 26) – when Kendrick Lamar was set to top the bill at the Pyramid Stage – will see highs of 23 degrees with a 16% chance of rain.

Saturday (June 27) – when legendary Beatle Paul McCartney was set to perform – could see showers in the early morning, but looks to be largely dry with highs of 22°C and lows of 14°C.

Finally, the Sunday night of the Festival (June 28) – where Taylor Swift was set to close the event – is currently predicted to have highs of 22°C and lows of 13°C.

Accuweather, on the other hand, suggests that the chance of rain is higher and that “a bit of rain” will likely fall on the Saturday and Sunday mornings of the Festival’s cancelled dates.

Last year’s edition of Glastonbury saw one of the hottest festival weekends on record, with temperatures peaking at 30°C.

Glastonbury Festival was set to celebrate its 50th anniversary next week – with headliners in Kendrick Lamar, Paul McCartney and Taylor Swift – but was forced to cancel this year’s instalment due to the COVID-19 pandemic.