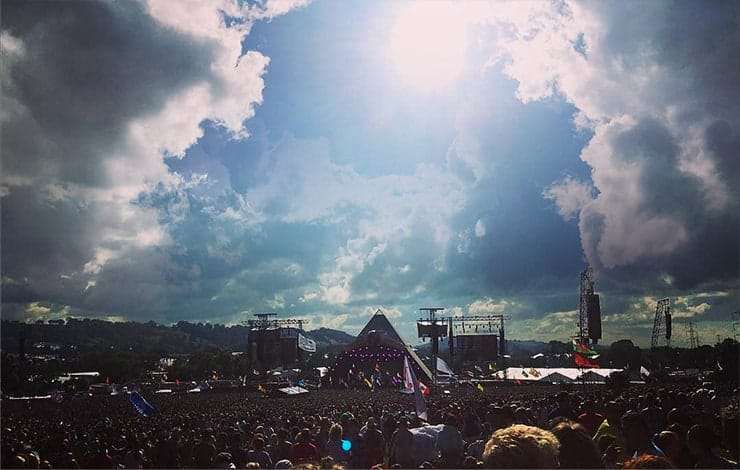 The weather for what would’ve been Glastonbury‘s 2021 edition looks to be a mixture of light morning rain at the start of the Festival and improve as the days progress to more of a dryer weekend with “sunny intervals”.

Glastonbury was forced to cancel its legendary Worthy Farm-held event for the second consecutive year in 2021 due to the coronavirus pandemic, but had this year’s instalment – which was originally scheduled for the last weekend of June (Wednesday, June 23 – Sunday, June 27) – gone ahead as planned, looking at the latest weather forecast for the local area suggests that it would’ve gotten off to a light cloudy/rainy start, only to develop into what appears to be a largely milder Glasto-weekend.

A word of warning though – a weather forecast a week ahead of any event is too uncertain for planning. As Climate Professor and Green Fields speaker Richard Betts accurately points out that in 2019 the forecast at this stage was hot & humid with heavy thundery showers, which by the weekend saw it change to light rain early in the week, then hot & humid later. 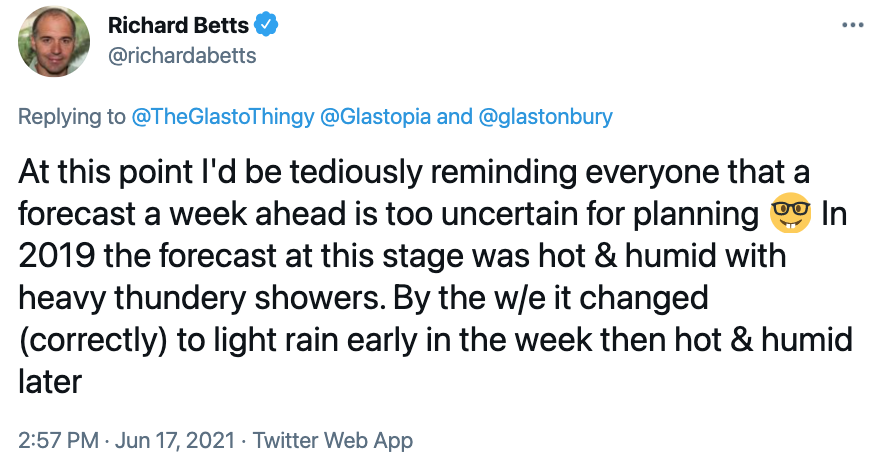 As of the time of writing – which is roughly a week prior to the cancelled event – according to the BBC Weather website, the local area around Worthy Farm is set to be treated to a shaky Wednesday start of “light cloud” and “light rain” on Thursday, to what is then said to develop into “sunny intervals and gentle breeze” towards the end of the week, bringing temperatures between 17-21°C.

Friday (June 25) – which is traditionally when the first header kicks off the Pyramid Stage – will see highs of 20 degrees with a 32% chance of rain in the early morning.

Finally, the last day of the Festival which is the Sunday (June 27) – when the finale headliner closes out the Pyramid Stage – is currently predicted to stay dry and have similar highs and lows to the previous day, of 21°C and 13°C.

Similar to the BBC, Accuweather‘s forecast suggests “a touch of rain” may likely fall on the Thursday afternoon and Saturday morning of the Festival’s cancelled dates.

The Last edition of Glastonbury which took place in 2019 saw one of the hottest festival weekends on record, with temperatures peaking at 30°C.

Although there will be no Glastonbury taking place this year down at the Farm, the BBC’s has announced celebrations of the iconic Festival with a musical extravaganza, as they bring the magic of Worthy Farm to viewers and listeners with ‘The Glastonbury Experience 2021‘, between Friday 25th – Sunday 27th June.

Meanwhile, Michael and Emily Eavis are inviting campers, for one year only, to experience the farm in a way they’ve never been able to before – in Worthy Pastures – a family-friendly campsite at Worthy Farm which will take place later this summer.