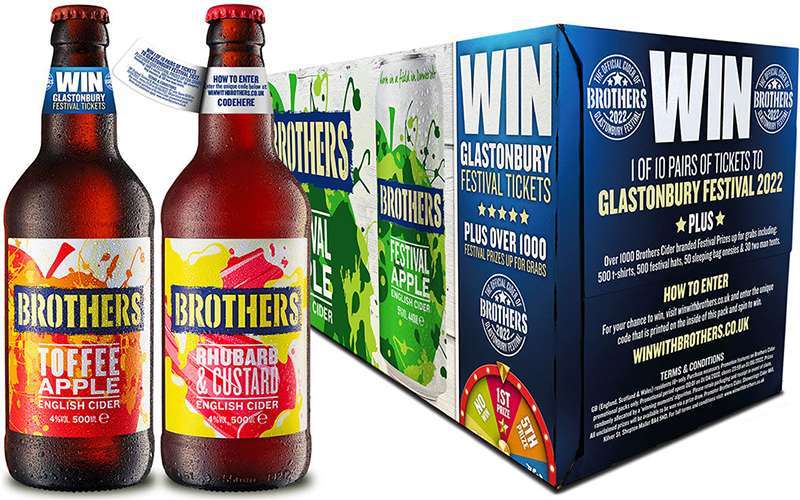 Brothers Cider currently have a competition going for the opportunity of winning 1 of 10 pairs of General Admission tickets to Glastonbury Festival 2022.

All you have to do to be in with a winning chance is look out for special promotional packs of Brothers 10x440ml Festival Apple cans, and a range of Brothers 500ml bottles with promotional Peel & Reveal neck labels – then, follow the instructions on the pack to locate your UNIQUE CODE and enter it online at winwithbrothers.co.uk and “Spin2Win”.

Earlier this month Brothers were announced as ‘The Official Cider for Glastonbury 2022’.

To celebrate the news, the Somerset cider company will be releasing Brothers Festival Apple Cider as the main act to be served at over 100 bars during the 5-day event, which will be available in selected stores around the country and served alongside other familiar Brothers favourites – including Wild Fruit and Toffee Apple. With no artificial flavours or ingredients, Brothers is gluten-free and vegan accredited.

What’s at stake + how and when to enter

1 of 10 pairs of General Admission tickets to Glastonbury 2022.

This Promotion commenced the 1st of April and closes on the 1st of June 2022.

Alongside the 10 pairs of Glastonbury Festival tickets available, there are also over 1000 branded Brothers Cider festival prizes up for grabs, including 500 t-shirts, 500 festival hats, 50 sleeping bag onesies and 30 2-man tents.

To view the full list of all the competitions currently running for the chance of winning tickets to Glastonbury 2022, click here.

Glastonbury 50: The Official Story of Glastonbury Festival
£9.43
View on Amazon