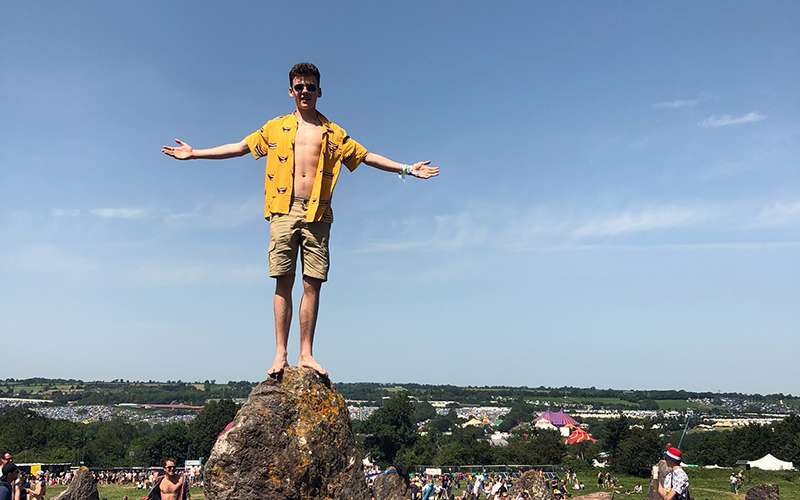 Woody Cook at the Stone Circle at Glastonbury Festival

Last year in 2021, at the height of the coronavirus pandemic, after Glastonbury was forced to cancel for the second year in a row, we received a wonderful contribution to our Glastomonial Gallery project from a young up-and-coming DJ by the name of Woody Cook.

Now, one year later, ahead of Glastonbury 2022 (22nd-26th June), we catch up with friend of the Feed, Woody Cook (AKA son of Fatboy Slim and Zoe Ball), to ask about his upcoming debut performance at the Festival, and then some.

GFF: How would you describe yourself and what you do to those who don’t know anything about you?

GFF: We know that you first went to Glastonbury in 2009 (well technically speaking, in 2000 while still in your mum’s stomach), but when was the first time you ever heard about Glastonbury Festival – what was the context?

W.C: Every Glastonbury-year, there was always talk of it in the house – it was (and still is) a big thing in my home.

W.C: I would say it’s the best of humanity united with art, music, and love – taking place in the biggest temporary city in the UK.

GFF: Have you ever played Glastonbury before and can we expect to see you perform at the Festival this summer (if so, on what day and stage)?

W.C: No, I haven’t played the Festival – well, not yet! But this year, you can catch me playing the Greenpeace Stage at 20:30 on the Thursday (23rd June).

GFF: How would you describe your musical taste/performance and has Glastonbury influenced it in any way?

GFF: Your dad, Fatboy Slim (AKA Norman Cook), is considered somewhat of a Glastonbury-staple…

W.C: He will keep coming till they won’t have him, he’s been every year I’ve been alive!

GFF: Like your dad, do you also see yourself becoming part of the Festival furniture as the years progress, and do you have any ambitions of maybe one day playing one of the bigger stages at the Festival?

W.C: I bring the energy every time I play and am happy to become a Glasto-regular.

GFF: What is your favourite piece of clothing which you always take to Glastonbury to get the mojo going, and has your mum, Zoe Ball – who apart from being the first female host of both BBC’s Radio 1 and 2 Breakfast shows, is also known the world over for being an avid Glasto-fashionista – had any influence on your festival fashion?

W.C: A bandana and bulky trainers – Who takes fashion tips from their mum? Ahah.

GFF: In your Glastomonial, you said that your favourite food stall at Glastonbury is Olie Hyde’s Halloumi Fries – do you know if he’ll be back for 2022?

GFF: You mention Maceos Bar as being your favourite area at the Festival – for those who’ve never been, where is it located on-site, and what makes it so special in your eyes?

W.C: I can’t tell you where it is! I can never remember… I spend more time looking for it than being actually there.

GFF: Glastonbury has seen some seminal performances throughout its 50 years of existence – If you had the chance of going back in time to ONLY ONE performance, which would it be and why?

GFF: Who are you most looking forward to seeing at Glastonbury 2022 when it finally returns this year?

W.C: Primal Scream, and The Avalanches.

GFF: Is there anything that we’ve missed that you would like to add?

See as much as you can but, don’t over-commit it’s a marathon, not a sprint. Love the farm, leave no trance.